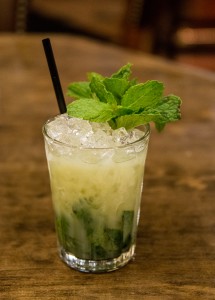 Absinthe is historically described as a distilled, highly alcoholic (45–74% ABV / 90-148 proof) beverage. Absinthe originated in the canton of Neuchâtel in Switzerland in the late 18th century. It arose to great popularity as an alcoholic drink in late 19th- and early 20th-century France, particularly among Parisian artists and writers.

By 1915, absinthe had been banned in the United States and in much of Europe, including France, the Netherlands, Belgium, Switzerland and the Austro-Hungarian Empire. A revival of absinthe began in the 1990s, following the adoption of modern European Union food and beverage laws that removed longstanding barriers to its production and sale. By the early 21st century, nearly 200 brands of absinthe were being produced in a dozen countries, most notably in France, Switzerland, USA, Spain, and the Czech Republic. (source: Wikipedia)

And you say, why all this explanation of absinthe? And how does this relate to baseball? First, only at the Ritz would I hear about this drink. So let’s start there. A drink for the aristocrats, I was introduced to Absinthe by a 70-year old from Connecticut that was on holiday with his beautiful wife. Now where does baseball come in, some many say the relationship of the psychoactive properties that have been associated to the liquor and a baseball player’s psyche might be enough. But in this case Absinthe was just the link to a long night of baseball talk and banter about the upcoming World Baseball Classic.

My man, Orlando (bartender at the Ritz-Carlton San Juan) not only was passionate about his craft and the ability to prepare the perfect Absinthe drink, he was just as passionate about the Puerto Rican baseball team, and explaining the passion the island had for their baseball players. Whether it was Carlos Beltran, the Molina brothers, or island legend Roberto Clemente, there was no denying the game of choice in PR, baseball is KING! When I told him, I had just arrived from Atlanta to watch the World Baseball Classic, it is like we became instant friends.

What I didn’t realize was one statement about World Baseball Classic would link the entire bar together and bring in people from the lobby just to talk about baseball, it was like we had turned the lobby bar to a sports bar. As we watched Orlando prepare Absinthe, the conversation ranged from the Yankees and their eventual decline due to player salaries, to who had a better baseball history-the Dominican Republic or Puerto Rico, how the Angels and Dodgers could field such high salaried teams in the same market, to Atlanta’s inability to win the big one (that was a sore subject). Then as we are sampling the Absinthe (and that’s what I did…sampled-it tastes like black jelly beans btw), I see Orlando inviting more people to come over, and the next thing I know, a guy named Joe is pulling out his phone showing me photos of him in a Yankee uniform on the field at Yankee Stadium and telling me about his son’s quest to leave the island and get drafted and eventually play in the majors. And Robinson Cano was rumored to be staying at the hotel. Of course that brought back up the PR vs. DR rivalry.

This was night #1, and I knew I was in baseball heaven! Home of some of the best baseball players in history, and everyone was willing to let me know!

This night, Absinthe and Orlando brought their A-Game…it’s time to play ball!